Book Review and Giveaway ~ A Texan's Choice by Shelley Gray 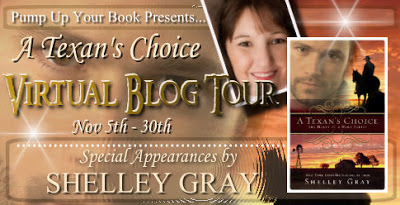 *I received this book from the publisher  in exchange for my honest review.* 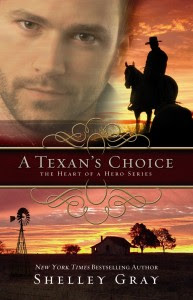 Texas, 1874. Long ago, Scout Proffitt gave up on ever being a man of honor like his Civil War hero brother Clayton. But when Scout steps foot on the rundown remnants of the Circle C ranch, he wonders if maybe just maybe the Lord has something different intended for him. Rosemarie has lived most of her life doubting her worth and shouldering the blame for her brother 's death. But when a stranger rides onto her ranch, claiming he owns it, she suddenly is given a choice: either keep looking at the dark side of life . . . or dare to dream.

I hadn't read the first two books in this series so I had to do a little work figuring out who was who.  I think this was one series that reading the prior books would have been beneficial.

Throughout most of the book, there are three different people/places that are being followed.  It was a bit confusing at first but after I got to know the character a bit more, it go easier.  Then toward the end, all three parts meet together and a lot of great action takes place.

Overall, I enjoyed reading this book but do wish I had read the first 2 books so I knew more of the back story.

Rosemarie Cousins:  Rosemarie is the outcast of her family and is left to fend for herself.  She feels no self-worth and thinks she deserves everything that has happened to her.  Until Scout comes along...
Scout Proffitt:  Scout is an outlaw, a killer, a gun-for hire.  He has decided to put that all behind him and start a new life at the ranch he won in a poker game.  Here he meets Rosemarie and his life is never the same...

I really liked the part of the book when Rosemarie and Scout are getting to know each other.  Rosemarie is determined to take care of Scout and Scout isn't used to anyone caring.  It is a sweet romance in the midst of drama and heartache.

Once again, he held out his hand for her to take.  For the first time, she took it easily.  Like they were becoming a pair instead of merely two lost souls stuck on some of the worst land in the great state of Texas.  And when her slender fingers, cool and soft, slipped between his, Scout was struck how right it felt.

This cover has everything a western romance should, right down to those gorgeous brown eyes!  The sunset behind the ranch is breathtaking.

-As I mentioned, there were so many character to try to get straight.  It felt a bit jumpy at first hopping from one scene to the next.

-There are some scenes and mentioning of the "marriage bed" but it is tastefully done and not overly detailed.

*Mandatory-  Please leave a comment telling me if you lived in the 1870's what modern convenience you would miss the most? TV?  Cell phone?  McDonalds?  lol