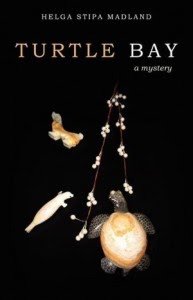 *This promo is a part of the Pump Up Your Book Blog Tour.
Click the image above to see other blog stops.*

A robbery and the disappearance of an English professor at the famous Turtle Bay resort in Oahu, Hawaii keep Detective James Kahamala of the Honolulu Police Department and his family, twin daughters Myra and Maya, Aunt Beatrice, and dachshund Questor on their toes. Follow their adventures into English Department politics and family complications. Ultimately, the dachshund saves the day. A “whimsical” mystery, not to be missed!


HELGA STIPA MADLAND was born in Upper Silesia, now a part of southwest Poland, in 1939. In 1945, she was a refugee along with her Mother and Sister; Dad, a forester, had been drafted. They left their home village together with her aunt, Tante Hilde, whose husband, Onkel Joseph, was able to help because he was a police detective and had not been drafted, and their three children, Rita, Lothar and Sigrid. Lothar is two days younger than Helga, and the cousins regarded this to be a cause for constant conflict. Later, in West Germany, two more cousins were born, Guenther and Reinhart, a large group of cousins.

In 1954, by way of Canada, the author, her parents Hubert and Ann, sister Ingrid, and brother Michael (born much later in West Germany) moved to the United States. Helga graduated from Helias High School in Jefferson City, Missouri in 1957.

Hubert Stipa was able to obtain a position as a forester in Idaho and lived there, along with his wife Ann, until his death in 2004 at the age of ninety-three. Helga worked as a secretary, something she thought she would never do because she could not type; after a short while, she married Bill (Spike) Madland and they produced three amazing children, Kathryn, Michael and Patrick, who now live with their spouses, Bob, Lisa and Bobbie, in Boise, Seattle and Anchorage. Helga is fortunate to have six grand children, Bobby and Alex, Sydney and Colin, Atticus and Melozie, and two nephews, Christopher, her brother’s son, and Tom, her former sister-in-laws, Joanne’s, son.

Former sister-in-law suggests that the marriage to “Spike” did not last. After completing her B.A. by hook and by crook (night school, correspondence courses, one semester on campus), Helga earned a B.A. in German and English education and taught high school for three years in Twin Falls, Idaho. Eventually, she noticed that Ingrid, her sister, who by then had returned to graduate school in California, earned about the same as a teaching assistant as she earned as a high school teacher in Idaho. Helga applied for graduate study in German and was accepted at the University of Washington, from where she graduate in 1981 with a Ph.D. in German and a minor in Spanish. By then, daughter Kathy had graduated from high school and was about to attend college. Sons Mike and Pat accompanied her to Seattle, where they lived on campus, and undoubtedly received an effective out-of-classroom education.

In 1981, Ph.D. finally in hand, Helga asked her sons, who by then had graduated from high school, if she should accept the assistant professor of German position she had been offered at the University of Oklahoma; they told her: “Mom, if you don’t leave, we might.” Such maturity was difficult to resist. She took the job.

After “rising” to department chair of the Department of Modern Languages, Literatures and Linguistics at the University of Oklahoma, an institution she generally adores, she retired in 2005 and is now Professor Emeritus at OU.

Last but in no way least, she has been married for twenty years or so, to her second husband (and, believe me, last), Richard Beck, who teaches Ancient Greek at the University of Oklahoma. When he isn’t reading Greek grammar or literature, he is reading international recipes, or worrying about the two dogs, the long-haired dachshund Questor, Peter, a sort of schnauzer-terrier mixture, and four domestic house cats, Tassos, a languid, yellowish feline, Gretel, his tortoise shell sister, Percy, a calico cat, and Fritz, a very hairy cartoon cat. All these animals live with us. In addition, Richard like to garden and travel, in reversed order.

Visit Helga on the web at www.dachshundscanflyhelga.com .

Posted by collettakay at 6:13 AM