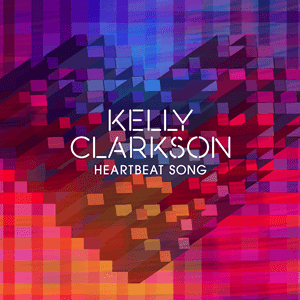 Listen to the song HERE.

1) Kelly Clarkson is singing an upbeat song about falling in love. Think of your favorite love song. Is it about finding love or losing it?
Finding it.


2) This song was co-written by Kara DioGuardi, who was a judge on American Idol. Kelly was, of course, the first American Idol. Do you watch Idol, The Voice, or America's Got Talent?
I used to watch Idol but stopped a few years ago.  My hubby and I watch the Voice and AGT.

3) In this video, Kelly is blonde. Clairol based a famous ad campaign around the assertion that "blondes have more fun." Tell us another commercial catchphrase (it can be for any product at all).

Be all that you can be.


4) As a young girl, Kelly wanted to be a marine biologist. She jokes that she changed her mind after seeing Jaws. Tell us about a movie that really scared you.
I absolutely refuse to watch scary movies!  No way!

5) Kelly is very involved with NASCAR, performing at pre-race concerts and appearing at their Champions' Breakfast. Are you a race fan?
I used to be big NASCAR fan and even went to a race.  But then I got married and had kids...


7) The Blackstocks have a baby girl, River Rose. In May, the family visited an Australian wildlife preserve and introduced her to koalas and kangaroos. Have you visited the zoo this year?
Not this year.  My cousins went to the Pittsburgh Zoo last weekend.  Wish we would have gone along :(

8) Upon learning that she was getting criticized on Twitter for being "big," Kelly responded, "Say what you will. It's a free world. It doesn't bother me." How about you? Do you worry what other people think of you?
I'll admit it.  Yes.  But I worry more over what I think of myself.  Does that make sense?

9) She bid over $200,000 and won a ring that had once belonged to Jane Austen. (She doesn't have the ring, though; the British government banned its sale because it's a historic artifact and Kelly's money was returned.) She also has a first edition of one of Austen's novels. Who is your all-time favorite writer?
Jane Austen!  I didn't know Kelly was a fan!

Please leave a comment with a link so I can return the visit!