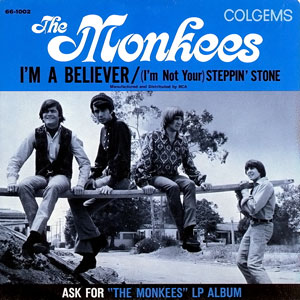 Thanks to Cie for recommending the Monkees

2) "I'm a Believer" is the best-selling Monkees song. Can you name another one?

3) On their TV show, the boys competed for the same girl. Have you and a friend ever been romantic rivals?

4) In another episode, the Monkees visited the circus. If you were confident there was a good strong net beneath you, would you walk across the high wire?
I think I would give it a try as long as I knew the net would catch me :)

5) The Monkees show originally aired on Monday nights. Do you have a favorite day of the week?
I actually think that Monday is my favorite day.  I'm a SAHM so after the craziness of the weekend it always feels good to get back on a routine of a normal day.

6) Davy Jones guest starred on an episode of The Brady Bunch. The plot revolved around Marcia's efforts to get him to perform at the prom. Share one of your memories from a school dance.
My favorite memories from a school dance is actually decorating for our Junior Prom.  It was so much fun to deck out the whole gym like an enchanted garden and it was a great time with my friends!

7) At the height of their popularity, the Monkees' faces and logo appeared on a lot of merchandise, including lunch boxes. Which would you rather have for lunch -- chicken salad, tuna salad or egg salad?
None of the above.  Yuck!

8) You have an afternoon all to yourself. Would you rather spend it at the mall, checking outwhat's new in the stores and people watching, or walking through the forest, observing the birds and trees and leaves?
Can I split the time between the two?

9) Do you have a good memory for names?

Posted by collettakay at 8:27 AM