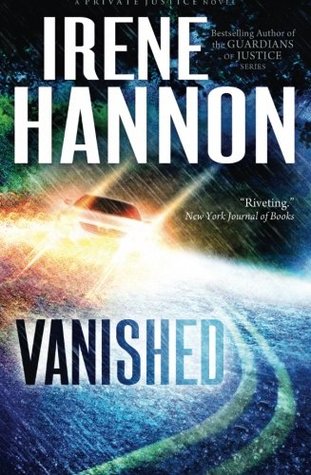 A dazed Moira is relieved when a man opens her door, tells her he saw everything, and promises to call 911. Then everything fades to black. When she comes to an hour later, she is alone. No man. No 911. No injured person lying on the side of the road. But she can't forget the look of terror she saw on the person's face in the instant before her headlights swung away. The person she hit had been in trouble. She's sure of it. But she can't get anyone to believe her story--except a handsome former police detective, now a private eye, who agrees to take on the case.

From the very first page, readers will be hooked into this fast-paced story full of shocking secrets from fan-favorite Irene Hannon. "Vanished" is the exciting first book in the Private Justice series: Three justice seekers who got burned playing by the rules now have a second chance to make things right.
My Thoughts:

When I was trying to pick out my next read, I decided I wanted something with mystery, intrigue and a fast pace.  I like to alternate my reading choices to keep it interesting.

This book started off high-paced, when Moira is in an accident and nobody believes her story about what happened.  Enter Cal and Phoenix Inc.  I loved learning about the PI aspects and the investigation.

The author wrote the book with the mystery unfolding bit by bit throughout the book.  It was interesting to read as it was pieced together.

The only thing that bothered me was Moira being referred to as "hot" quite frequently.  It seemed a bit strange and got a bit old.

I really enjoyed getting to know the PI's of Phoenix Inc.  I can't wait to read more of this series.