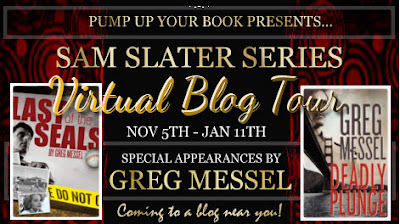 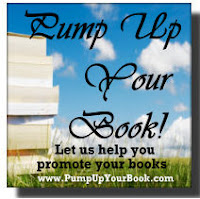 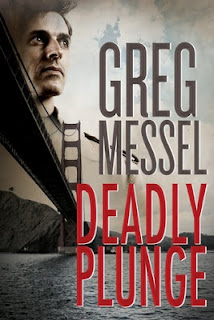 Former baseball player and newly-minted private investigator, Sam Slater is hired to find out why a rich, politically-well connected San Francisco man, Arthur Bolender,  suddenly ended his life by plunging off of the Golden Gate Bridge. All those who know Arthur say unequivocally that he did not commit suicide.  However, Bolender's body was found floating in San Francisco Bay and his car was abandoned in the traffic lane of the bridge.  Meanwhile, Sam's romance with glamorous TWA stewardess Amelia Ryan continues to blossom and deepen. She is now his secret fiancee. Amelia also eagerly helps Sam solve his cases when she's in town. The key to unraveling the mystery seems to be a strange old Victorian-style house. Bolender's widow, a rich, seductive socialite named Maggie Bolender, was not even aware that her husband owned the house. What is really going on behind the doors of the mysterious house?  Finding the answers will plunge Sam and Amelia into a dangerous world of political intrigue in the exciting sequel to "Last of the Seals.

I liked this book even more than the first book in the series!

I loved the mystery, the intrigue, the setting, the characters and the writing.

I can't wait for the next book in the series to be published sometime this spring.


Amelia Ryan:  Amelia is a 24-year-old stewardess from an Irish Catholic family.  Amelia shares an apartment with 2 other stewardesses.  She loves to help Sam with his cases when she's in San Francisco.


Sam Slater:  Sam Slater is an Army Veteran of World War II who is also a former baseball player.  He is now a Private Detective.

I think my favorite scene is when Sam proposes to Amelia.  It is very spur of the moment but heartfelt.  He is willing to wait until she's ready to stop being a stewardess because stewardesses weren't allowed to be married.

Sam was just concluding his conversation with Rita when he noticed an attractive statuesque women enter the office and talk to his secretary, Janet Simmons.  Sam's eyes met Janet's as they exchanged a glance through the open inner office door.  Sam quickly hung up and signaled Janet to let the woman enter.

Margaret Bolender was a woman who physically demanded attention when she walked into a room.  There was an aura about her that said, "Look at me."  Sam immediately detected that Maggie knew this and relished it.

I love the covers for this series.  The book revolves around a mysterious death from the Golden Gate Bridge and that is the focus of the picture along with the water below.

-This is a general market book so there is some bad language or sexuality in it but not overly so.  I wasn't uncomfortable reading it at all.

*Mandatory- Please leave a comment telling me if you've ever visited San Francisco or what is the farthest place you've traveled to.