I found this recipe at http://www.ourchocolateshavings.blogspot.com/ .   I adjusted it a bit to lower the fat content. 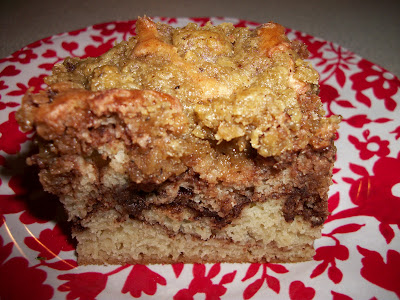 Mix ingredients in a small bowl and set aside.  I put more cocoa.  You can never have too much :)

Sift together flour, baking powder, baking soda and salt together in a medium bowl.

In another mixing bowl cream butter (or use applesauce) until smooth.  Add sugar and beat until mixture is light and fluffy.  Add the eggs, one at a time.  Beating well after each addition.  Add the sour cream and vanilla.  Beat just until incorporated.

Add the dry ingredients in three additions, beating only until each addition is incorporated.  Do not overmix.

Spread 1/3 of the cake batter into the prepared pan.  Sprinkle 1/2 of the chocolate cinnamon swirl mixture over batter, covering entire surface of the batter.

Spoon 1/2 of the remaining batter over the swirl mixture and spread it evenly.

Sprinkle with the crumb topping evenly over the top of the batter. 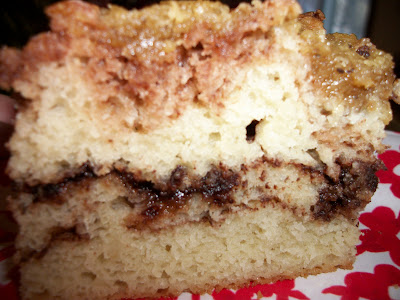 My oldest, Kaylee, walked in the door from the school bus as I was taking this out of the oven.  It smelled so good, that she wanted a piece right away and was almost begging me to cut it.  I told her it had to cool and she checked back at least 10 times before it was cool enough to give her a piece.

She LOVED it!  She had 2 pieces last evening, a piece for breakfast this morning before school and there is a piece here for her after-school snack.

I took the cake to share at Prayer Meeting/Bible Study last night.  That is where I had my first piece and it was still just a tiny bit warm.  Yummm....  Especially the nutty/buttery crumb topping.  The applesauce gave it just a tiny hint of apple flavor that in no way detracted from the cake, only added to it.

Putting the cake together was a little bit involved because I had to break out my large food processor (my small one was, too small).  I hadn't used it yet so I had some figuring out to do.  But other than that, this was definitely a great recipe and I would recommend trying it out.

Let me know if you do!

Please see my sidebar for the great places I'll be linking to!
Posted by collettakay at 2:31 PM