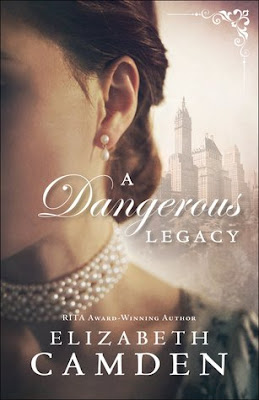 Telegraph operator Lucy Drake is a master of Morse code and has made herself a valuable asset to the Associated Press news agency. But the sudden arrival of Sir Colin Beckwith at rival British news agency Reuters puts her hard-earned livelihood at risk. Colin is talented, handsome, insufferably charming—and keeping a secret that jeopardizes his reputation.

Despite their rivalry, Lucy can't deny that Colin has the connections she needs to give her family an edge in the long legal battle they've been waging over their rightful inheritance. But when she negotiates an unlikely alliance with him, the web of treachery they dive into proves to be far more dangerous than they ever could have known.

I absolutely adore Elizabeth Camden as an author!  (I don't exactly know her personally, now do I?)  Every book I've read by her has been AMAZING in writing, content and history.  I love that I feel like I've learned more about history after reading one of her novels!

"A Dangerous Legacy" was spectacular!

The book was set in New York City, for the most part, at the turn of the 20th century.  I learned so much about plumbing, newspapers, Morse Code, telegraphy, asylums, PTSD, the Panama Canal, shooting competitions, homing pigeons and even a snippet about the Boer War!  I was sucked right in from the comfort of my new bed pillows :)

At first I didn't know if I was very fond of either Lucy OR Colin.  They both had characteristics that weren't very appealing.  Lucy was obsessed with suing her uncle and Colin was obsessed with marrying into money.  The author deals nicely with both of these issues and finishes the book off with a "bang".  By the end of the book I loved both the main characters and was sad to leave them.

I stayed up late to finish this book!  That tells you how good it is!  I like my sleep, but I liked this book more :)

I'm so excited that I have the second book of this series on my TBR shelf!  I like to alternate between contemporary and historical reads, so it won't be my next read but it will be soon!

Onto the next book!
﻿
Colletta
Posted by collettakay at 12:00 AM