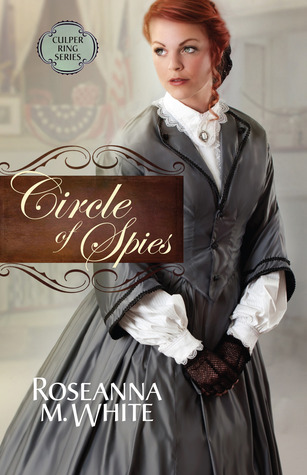 This exciting and adventurous romantic spy novel is the third book in the Culper Ring series from Roseanna M. White. Circle of Spies combines fascinating cloak-and-dagger secrets with a tale of love and intrigue at the end of the Civil War.Baltimore, 1865--Marietta Hughes never wanted to be a spy...but espionage is thrust upon her as the War Between the States rolls on. Unbeknownst to her, a Confederate secret society bent on destroying the Union she loves has been meeting in her basement. When she discovers the plots and papers covering her walls, she feels as though she is losing her world.Slade Osborne, an undercover Pinkerton agent, is determined to do whatever is necessary to help end the conflict between the North and the South. When he infiltrates this secret cell, it isn't just their inner workings that baffle him--it's the beautiful woman who seems to be a puppet for the new leader and yet...somehow not an enemy of the Union.Can he trust her? Will she trust him? Will their shared faith sustain them? And can Marietta and Slade stymie the enemy long enough without being discovered to see their beloved country reunited?