Book Review ~ The Dashwood Sisters Tell All by Beth Pattillo 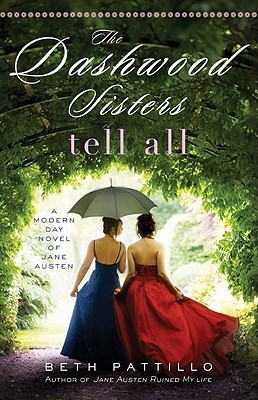 Following Jane Austen Ruined My Life and Mr. Darcy Broke My Heart, Beth Pattillo returns with her new novel. Inspired by Sense and Sensibility, The Dashwood Sisters Tell Allfollows two modern-day sisters as they set out on a walking tour of Jane Austen's England and uncover what might actually be Jane's long-lost diary.

Ellen and Mimi Dodge have never been close, but their mother's dying wish sends them on a walking tour of Hampshire, England, that follows in the footsteps of Jane Austen. Their mother also left them something else: a diary that belonged to Jane's sister Cassandra. These pages shed light on the secrets that nearly tore the Austen sisters apart and inspired one of the greatest love stories of all time. They also bring Jane to life in a way that no one has ever seen before: through the eyes of her sister. As the Dodge sisters embark on their walking tour, they too are drawn together in ways they never expected. They also discover that Cassandra's diary holds secrets, and someone doesn't want Ellen and Mimi to discover the truth. As they stumble on their way toward love, the women learn how Jane and Cassandra Austen inspired the original Marianne and Elinor Dashwood and come to realize that despite their very different personalities, they are a vital part of each other's happy endings.
My Overall Feeling of the Book:

I thoroughly enjoyed this whole series.  The first two I loved.  This one fell just a bit short of them.  I wasn't impressed with the romantic aspect of the sisters.  It felt too forced and quick.  Is a week really long enough to fall in love?  True love?

As for the mystery and the clues, I loved that aspect.  It was so much fun trying to figure it out.  There were more than a few ways it could have gone and I wasn't sure which way it was going to be for quite a while.

I loved the correlation between sisters of Jane Austen's time and sisters of today.  I have two girls and would love them to become best of friends.

"A gentleman learns from an early age
To play his part upon the stage
His lines are crisp, his speech is clear
He studies most from year to year."

Again, the covers for this series were spectacular!  I love the sisters walking side-by-side.

Posted by collettakay at 8:08 AM