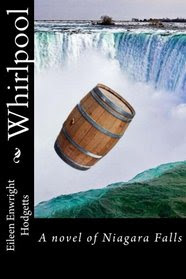 And enter to win a Kindle Fire HD!

Evangeline Murray, a young widow from Ohio, is recruited by the Women’s Freedom Movement to represent the spirit of modern womanhood by going over Niagara Falls in a barrel. Evangeline eagerly embraces her opportunity to achieve fame and fortune, until she sees the power of the River and begins to understand the risk she is taking.

Joshua McClaren, an enigmatic battle-scarred veteran of World War I, and the best boatman on the river, reluctantly agrees to launch the headstrong Evangeline. Joshua has seen hundreds of bodies surface in the Whirlpool below the Falls, and has faced death on the battlefields of Flanders and has no respect for the charming, impetuous Mrs. Murray, and her desire for fame.

Before the barrel can be launched, each of them will have to face their own demons, painful secrets will be revealed and the Niagara Rivers will claim two more lives. Inspired by true stories of the Falls, Whirlpool is a romance, an adventure, and the closest that most of us will ever come to taking the fateful plunge over the Falls.

Whirlpool is a fiction that is based on reality. Seven people have tried to ride over Niagara Falls in a barrel. Four have succeeded and three have died. The first person to make the attempt was Annie Taylor, a middle aged school teacher from Michigan who made a successful journey in 1901. Barrel riding at Niagara Falls is now forbidden by law, but at the beginning of the 20th century Niagara was a haven for daredevils of all types, and many of their exploits are included in the novel.

I loved the history in this book!  I don't think I would have fully appreciated it if we hadn't gone to Niagara Falls on 3 years ago on our family vacation.  We took the guided tour and learned so much from our tour guide.  He told us many of the stories that are included in the book.  We visited the Whirlpool and I think the place that most helped me get into this story was visiting the Daredevil Musuem where we actually saw barrels that had gone over the Falls.

This book took me right back to our wonderful visit to Niagara Falls!

Evangeline Murray:  Evangeline is determined to ride over the Falls in a barrel to bring attention to Women's Rights.  She also wants the fame and fortune that she believes will come with surviving the stunt.  She seemed a bit shallow to me at times but I couldn't help but like her anyway.

Joshua McClaren:  Josh has lived along the Niagara River his whole life and knows it like the back of his hand.  He has pulled countless bodies from the Whirlpool along with rescuing many others.  He doesn't understand why someone would risk their life and lets Evangeline know that he thinks she's a fool.
Cornelia Braithewaite:  Cornelia was the main feminist of the movement and was a complete user.  She used Iris de Vere for her money and was willing to risk Evangeline's life all in the name of "the cause".  I think she just wanted the limelight.  So many times I saw major flaws in her philosophy.  What a creep!


One of My Favorite Scenes:

Evangeline's ride over the falls and all the excitement and drama involved!  The build up was perfect and the detailing was excellent.

The river widened above the Falls.  The water rushed past, churning across a wide area of rocks and tiny islands.  Looking at the broad, innocent river, Evangeline thought how surprised the first river travelers must have been when their canoes started to gather speed, faster and faster, until there was not stopping them, and the white mist and thunder filled the air; and the water opened up to swallow them.

I like that the cover uses an actual picture of the Falls.  The barrel is such a major part of the story so having it front and center is also appropriate.  The title up the side is a bit odd, though.

This is a mainstream book and included some coarse language and a few sexual innuendos and references.

There are also some pretty gruesome scenes surrounding the deaths that have occurred at the Falls.