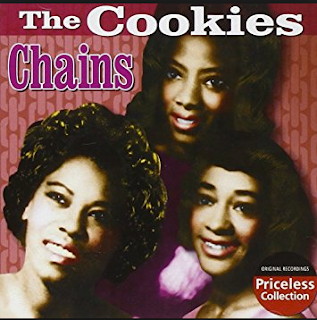 Chains (1962)
Unfamiliar with this week's tune? Hear it here.

1) The song is about a woman who is in love with her boyfriend, but still attracted to someone else. Do you believe a woman can be in love with more than one person at a time?
Wow!  What a loaded question!  I'm going to say no and leave it at that.

2) What about the male of the species? Do you believe a man can be in love with more than one person at a time?
See above.

3) This lyrics were by Gerry Goffin and the music by Carole King. Carole was a favorite guest of David Letterman's. When she appeared on his show, he often commented on how impressed he was by her firm handshake. She credited her memorable grip to time spent milking goats on her Idaho farm. Have you poured goat milk on your cereal? Eaten goat milk yogurt or cheese?
I've never eaten a product from goats.  I have, however, used lotion made from goat's milk and it was wonderful!

4) When it first came out, "Chains" was a favorite of 18-year-old George Harrison. It was at his recommendation that the Beatles added it to their early stage shows and even recorded it on their first album. When you were in high school, what was one of your favorite songs?

This one really has me digging back in my memory!  I'm going to go with this one:

5) In 1962, when this song was released, epic movies were popular on the big screen. The Longest Day was three hours long, and Lawrence of Arabia ran more than three hours and a half hours. Today's most popular movies are nowhere near that long. Do you think the average
American has a shorter attention span today than he did in 1962?
Yes.  Not to mention the drinks are probably bigger and we would need too many potty breaks for a 3+ hour movie :)

6) In 1962, First Lady Jacqueline Kennedy went on a two-week goodwill tour of India and Pakistan. She received a ceremonial "welcome necklace" in India. Made without jewels or precious metals -- just beads, sequins and paper -- it was valued by the First Lady for its delicate appearance and craftsmanship, and today it's on display at the John F. Kennedy Library. Tell us about a piece of jewelry that means a great deal to you, and why.

I have the necklace my grandmother gave me to wear when I got married.  She's no longer with us so it means a lot to me.

7) In Pakistan, Mrs. Kennedy made headlines by riding a camel. Have you ever ridden a horse, donkey, camel or elephant?
Only a pony!  lol

8) Also in 1962, the New York Newspaper Guild went on strike, so the nation's largest city went 114 days without a single daily paper. In 2018, how do you get your news?
The internet, of course!

9) Random question -- Complete this sentence: Before I go to sleep, I always ____take my medicine.____.
Please leave a comment with a link so I can return the visit!

Colletta
﻿
Posted by collettakay at 9:32 PM