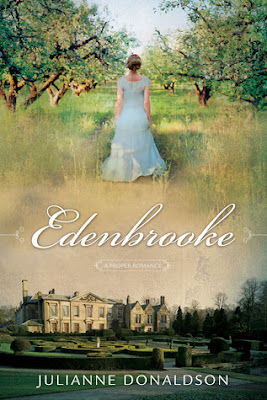 Blurb:
Marianne Daventry will do anything to escape the boredom of Bath and the amorous attentions of an unwanted suitor. So when an invitation arrives from her twin sister, Cecily, to join her at a sprawling country estate, she jumps at the chance. Thinking she'll be able to relax and enjoy her beloved English countryside while her sister snags the handsome heir of Edenbrooke, Marianne finds that even the best laid plans can go awry.

From a terrifying run-in with a highwayman to a seemingly harmless flirtation, Marianne finds herself embroiled in an unexpected adventure filled with enough romance and intrigue to keep her mind racing. Will Marianne be able to rein in her traitorous heart, or will a mysterious stranger sweep her off her feet? Fate had something other than a relaxing summer in mind when it sent Marianne to Edenbrooke.


My Thoughts:
...Sigh...
This book claims to be a "Proper Romance" and it definitely was.
I loved everything about this book!  The time period, the setting, the characters.  It was a proper regency romance full of mystery, highwaymen, inns, estates, and romance.
I started reading the book thinking it would be a quick read because of its length.  It became a quick read because I couldn't put it down and read it in two sittings.  Well, I was actually stretched out on my bed, but I digress.
I fell a little bit in love with Phillip which is what makes a great hero in a story to me.
It is written in the first person from Marianne's POV, so I felt like I was right there with her.
I was struck by something odd though.  Marianne is a 17-year-old heroine and I have a 17-year-old daughter!  How can that be?!?  At first I didn't think I would connect completely with Marianne, but I did.
The author did a remarkable job writing this book!  I can't wait to read more by her!

﻿
Colletta
Posted by collettakay at 3:27 PM