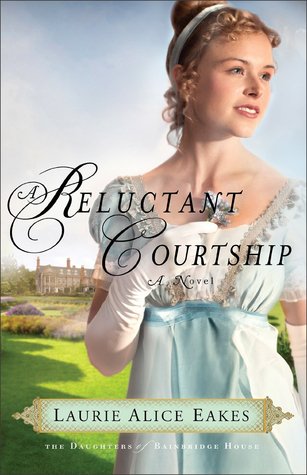 Honore Bainbridge has been courted by two men, one of whom turned out to be a traitor, the other a murderer. Banished to her family’s country estate, where she will hopefully stay out of trouble, she finally meets the man she is sure is exactly right for her: Lord Ashmoor. Tall, dark, and handsome—what more could a girl ask for?

But he too is under suspicion because of his American upbringing and accusations that he has helped French prisoners escape from Dartmoor Prison. If he’s to keep out of a British prison himself and secure his place in British society, Lord Ashmoor needs a wife beyond reproach—something the vexingly beautiful Honore certainly is not. Though they find themselves drawn to each other, family obligations may conspire to keep them apart forever.

For the sake of her heart, Honore determines to prove Ashmoor’s innocence—even if doing so risks her own life.
My Thoughts:

There were references to Honore's family and hints at what had taken place in books one and two but it didn't detract from being able to figure out what was taking place.

Regency era is one of my favorite genres to read.  I grew up reading it and love it still.

I really enjoyed that the hero of the story was an American.  Meric wasn't at all cocky and sure of himself.  He was just learning the way of the peers.

Honore, who I remember slightly from book one, was brave but the book also showed her vulnerability.  Sometimes it was heartbreaking.  I especially wanted to slap her brother for his heartlessness.

This book was filled with danger and intrigue from the first scene to the last.

Posted by collettakay at 8:13 AM