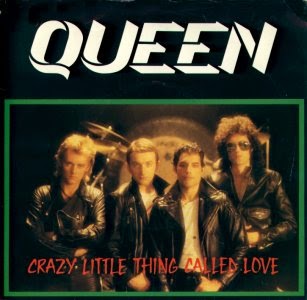 2) eThere's a statue of Freddie in Switzerland. There's another statue of him above the Dominion Theater in London. Tell us about a statue or memorial in your town.
The only statue/memorial we have in our little town is a Memorial to the Veterans.

3) Mercury said this song was inspired by Elvis Presley. What's your favorite Elvis song?
I'll have to go with "Love Me Tender" but his Christmas song are up there too.

4) This song was covered by the animated Alvin and the Chipmunks. Do you still watch cartoons?

I have an 8 year old so I do whether I want to or not! lol


5) The members of Queen met while attending Ealing Art College in London. Are you still in touch with the friends you had in your late teens and early 20s?

Not as much as I would like to be.  Life seems to get in the way.


6) During Queen's hey day in the 1980s, Mercury stayed in shape with tennis and swimming. Are you more accomplished on the court or in the pool?

Neither, really.  I've been in the pool more recently than on a court though.

7) In 1980, when this song was popular, Brooke Shields made a jeans commercial where she said, "Nothing comes between me and Calvins." It actually only aired for a short time because so many viewers called and complained about it. Have you ever called or emailed to protest something you saw on TV?

No, but the Brooke Shields protest is hilarious considering some of the things on TV now!

I write on post-its daily at work.  I think I was making a to-do list.


9) Random question: Do you blush easily?
I might get embarrassed but I don't think I actually "blush" very easily.
Please leave a comment with a link so I can return the visit!