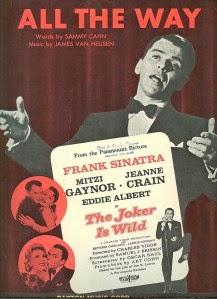 Listen to the song HERE.

1) In this song, Frank sings, "who knows where the road will lead us?" Which leads Sam to ask, does your vehicle have GPS?
Nope.  No GPS in my Subaru Legacy.

2) Sinatra introduced "All the Way" in the movie, The Joker Is Wild. During that film he also sang "Chicago (That Toddlin' Town)." A few years later, in the movie Robin and The Seven Hoods, he declared Chicago as his "kind of town." Besides Chicago, can you think of another city Frank immortalized in song?
Sorry...I can't... :(

3) When Frank was 19, he saw a pretty girl sitting on her front porch, giving herself a manicure. He went and got his ukelele and serenaded her. That girl became his first wife, Nancy. Tell us how one of your romances began.
My one and only true romance started in Church and is going strong today :)

4) Both Frank and Nancy grew up in New Jersey. When you think of NJ, what else comes to mind?
Gardens??

5) Sinatra made Las Vegas as famous for entertainment as for gambling. He was so identified with the Strip, that when he played Caesar's Palace the marquee simply said, "He's Here." Have you ever been to Vegas?
No, I've never been to Vegas and it really isn't on my list of places I must go.

6) Thin for most of his life, Frank was blessed with a metabolism that allowed him to whatever he wanted without gaining weight. He especially enjoyed clams posillipo. What's your favorite Italian dish?
Stuffed Shells.  Yummmm....

7) Perhaps because of his hardscrabble childhood, Sinatra was a soft touch for charities devoted to kids. One of his favorites was Variety, which sends disadvantaged children on day trips to museums, zoos and sporting events. Here's your chance to tell us about a cause that's near and dear to your heart.
Breast Cancer Awareness because every woman should be aware!

8) Sinatra was a neat freak who couldn't stand dust or clutter and showered at least twice a day. He got this from his mother Dolly, who was compulsive about housecleaning and hygiene. Can you think of a time when you caught yourself doing something and thought, "I'm just like Mom/Dad!"
Grocery shopping.  You must put like items together in the buggy and on the counter so it is easier to put away when you get home :)

9) In 1998, Sinatra was buried with the things he always had in tow: a bottle of Jack Daniels, a pack of Camels, a Zippo lighter and 10 dimes. Why the dimes? According to his daughter, "He never wanted to be caught not able to make a call." Of course, 17 years later cell phones have replaced pay phones. Anyway, tell us what you always carry.
My debit card, driver's license, sunglasses and lip gloss.

Please leave a comment with a link so I can return the visit!