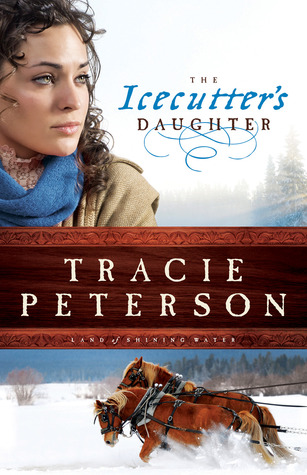 Blurb:
Merrill Krause longs for a family of her own, but she's bound by a promise to her dying mother to care for her father and older brothers until they no longer need her. She enjoys being part of the family business, harvesting ice during the brutal Minnesota winters. Merrill actively takes part, possessing a keen ability to work with the horses--despite the advice of her good friend, who disapproves of her unladylike behavior.

When Rurik Jorgenson arrives in their small town to join his uncle doing carpentry, he soon crosses paths with Merrill. But unlike other men, who are often frightened away by her older brothers, Rurik isn't intimidated by them or by Merrill's strength and lack of femininity. As he thrives under the mentorship of his uncle, Rurik dreams of inheriting the business and claiming Merrill as his wife. But while he is determined to start a new life, the past is determined to follow him when his former fiancee and her brother show up in town.

Soon Rurik is put in the center of a major scandal that may damage his relationship with Merrill. Can they learn to trust God--and each other--and embrace the promise of love?


My Thoughts:
This book had such an interesting storyline.  I loved the fact that Merrill had 4 brothers who were very protective.
Merrill could work alongside any man and baked goods that she made were enough to make me want to whip something good up!  She took good care of her father and brothers to fulfill the promise she made to her mother.
Rurik was a good hero for the story.  He was very loyal and upstanding and not a push-over even when it would have been easier to go with what others thought he should do.
The setting was very fitting for the winter we've had.  Snowy and cold.  Very cold.  I can only imagine a Minnesota winter!
This is the first book in the "Land of Shining Water" series by Tracie Peterson.  The other books are already on my wishlist :)

Linking up to  WholeHearted Wednesday, R&R, Word Filled Wednesday, Coffee and Conversation, Ladies Collective,   Party in Your PJs,  The Mommy Club, Works or Me, Wake-Up Wednesday and  Women with Intention.