I'm really enjoying the first book of the "A Breed Apart" series, "Trinity", by Ronie Kendig. 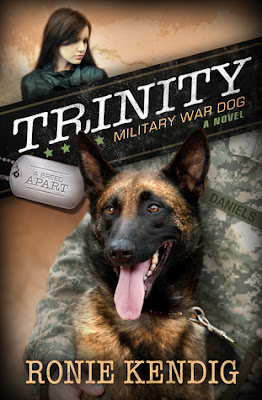 A year ago in Afghanistan, Green Beret Heath Daniel’s career was destroyed. Along with his faith. Now he and his military war dog, Trinity, train other dogs and their handlers. Though his passion is to be back in action, the medical discharge has forced Heath—and Trinity—to the sidelines. Military intelligence officer Darci Kintz is captured while secretly tracking the Taliban. Only one dog can handle the extreme conditions to save her. Trinity. Only one man can handle Trinity. Time is running out on the greatest—and most dangerous—mission of their lives. 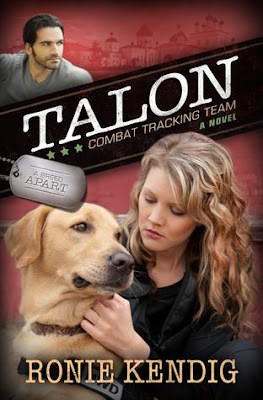 She’s on a mission to find her missing brother. Only his combat tracking dog knows where to look. . . .Air Force veteran Aspen Courtland just wants her brother back—dead or alive. The US Marine Corps declared him dead, but Aspen is unwilling to let him die without a fight. Aspen adopts her brother’s combat tracking team dog, Talon, hoping to come closer to finding peace about Austin. But after the brutal attack that separated dog and handler, Talon is afraid of his own shadow.Military Intelligence Operative Dane Markoski has run from the truth most of his life. Now, it’s the only thing that can save him—and his mission—if he dares to face the past. Talon is the key to achieving his objective…but the only way to Talon is through his new owner. But Dane swore he’d never work a woman.Teamed up in Djibouti, Dane and Aspen battle the elements and extremists. Survival depends on his skills, her optimism, and the courage of a traumatized combat tracking dog. Can Talon muster the valor for one last mission?