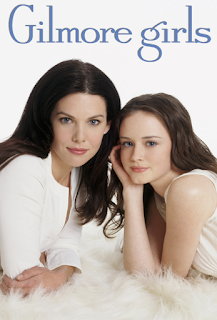 Where You Lead (1971)
Unfamiliar with this week's tune? Hear it here.

1) This is the theme of The Gilmore Girls, a TV show that ran  from 2000 to 2007. It recently enjoyed renewed popularity as a reboot. Were you a fan?

I've watched a few episodes but wasn't a hard core fan.  Maybe I need to check it out on Netflix.  What do you think?  Should I?

2) The show is about thirtysomething Lorelai Gilmore, her teenage daughter Rory, and her parents, Richard and Emily. The four of them had dinner together every Friday night. Who did you have dinner with on Friday? What was on the menu?
Every Friday, we too, have a Family Dinner.  Last night was in celebration of my Brother's birthday so we had Pizza and Cake :)  Happy Birthday, Dan!

3) Lorelai is outgoing and talkative. How about you? Are you seldom at a loss for words?
As a young child I was VERY shy.  I wouldn't say I'm "talkative" now but I've come a long way, baby!

4) Rory dreamed of going to an Ivy League school and then becoming a broadcast journalist. When you were in high school, what were your ambitions?
I've always wanted to be a wife and a mother.  Guess I'm living the dream!

5) Rory's grandfather (and Lorelai's dad) went to Yale and performed with the Whiffenpoofs, Yale's famous a cappella group. Have you ever sung in front of an audience?
I belong to our Church Choir (mostly a Ladies Choral these days).  So, yes, I've sung in front of an audience.  My Aunt Donna wants me to sing a solo but I'm just not into that.  I'll sing with a group but not by myself :)

6) Rory's grandmother (and Lorelai's mother) Emily was very active in civic organizations and worked hard on the Hartford Zoological Society's Annual Silent Auction. Have you ever attended an auction?
Does a White Elephant Sale count?

I didn't know she was in The Handmaid's Tale.  I think I'll have to start binge watching that one.  I love period pieces, so that would be my pick.

8) Carole King originally wrote this week's song, "Where You Lead," for her Tapestry album. Do you have a favorite Carole King song?
Can't say that I do.

9) Random question: If zoo animals could talk, which animal do you imagine would be the rudest?

The monkeys.
Please leave a comment with a link so I can return the visit!

Colletta
﻿
Posted by collettakay at 6:21 PM