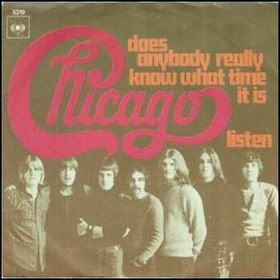 Listen to the song HERE.
1) This song asks, "Does anybody really care about time?" How about you? Do you pride yourself on being punctual? Or don't you really care?

I usually have to be at least time if not a few minutes early.  I'm not a 30 minute early kinda girl but 5-10 minutes will work.

2) The lyrics refer to a stranger asking the time. When is the last time you conversed with someone you didn't really know? What did you two talk about?

I guess it would be yesterday when I met with a rep at work.  We talked about the Steelers, football, and of course work stuff.

Yes, my mom used to sing it all the time!


4) Chicago is not only the name of the group but also of the midwest's largest city. Chicago is the proud hometown of such luminaries as Bill Murray, Michelle Obama and Derrick Rose. Does your town have any favorite sons or daughters?
S
adly not.  I live in a very small town and don't know of any famous people that have come from here.


5) The group Chicago was originally known as The Chicago Transit Authority, after the city's public transportation system. When is the last time you were on a bus or a train?


In October, a group of ladies and I went on a trip to NYC.  It was my first time ever on the subway.  I can't say it was my favorite thing in the world but it was very convenient.
6) Four of the original seven bandmembers are still with the group … after 48 years! What's the longest you stayed at the same job?
I was at a job for 2 years before I got married.  My longest "job" was being a SAHM for 10 years before returning to the workforce last year.
7) Lead singer Rob Lamm confessed that, at times, being in a band has been hard for him because he is by nature a loner. How about you? Are you more introverted or extroverted?
I'd have to say I'm an introvert.  I was extremely shy as a child and would literally hide behind my older brother.
8) This summer, Chicago will be touring with Earth, Wind and Fire. Have you seen/will you attend any concerts in 2015?
Just my daughter's band concert :)


9) Random question: What's the last mess you cleaned up?

We went camping, well "cabining" last weekend.  When we got back I had a mess to clean up from unpacking and tons of dirty laundry to wash.