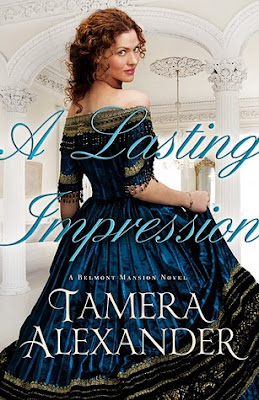 Blurb:
To create something that will last is Claire Laurent's most fervent desire as an artist. It's also her greatest weakness. When her fraud of a father deals her an unexpected hand, Claire is forced to flee from New Orleans to Nashville, only a year after the War Between the States has ended. Claire's path collides with that of Sutton Monroe, and she considers him a godsend for not turning her in to the authorities. But when they meet again and he refuses to come to her aid, she realizes she's sorely misjudged the man. Trading an unwanted destiny for an unknown future, Claire finds herself in the middle of Nashville's elite society and believes her dream of creating a lasting impression in the world of art may finally be within reach.

All that Sutton Monroe holds dear lies in ruin. He's determined to reclaim his heritage and to make the men who murdered his father pay. But what he discovers on his quest for vengeance reveals a truth that may cost him more than he ever imagined.

Set at Nashville's historic 1850s Belmont Mansion, a stunning antebellum manor built by Mrs. Adelicia Acklen, the richest woman in America in the 1860s, A Lasting Impression showcases the deep, poignant, unforgettable characters that set Tamera's stories apart and provides an inspiring love story that will capture readers' hearts and leave them eager for more.

My Thoughts:
Tamera Alexander is one of my favorite authors and staying up until 1am to read how the book ended proves it!  After all, I'm usually an early-to-bed kind of girl.  I can't tell you the last time I stayed up until 1am voluntarily :)
The setting of the story is almost a character in and of itself.  Belmont Mansion is described as an opulent estate with everything a person could imagine in the 1860's.
Claire, though a bit naïve and timid in the beginning, flourished under the tutelage of Adelicia Acklen, her employer.  She came out of her shell and learned how to stand up for herself which I was hoping would be the case.  I love how the author developed her character.
Sutton, or "Willister", was everything the hero should be.  Smart, kind, caring, thoughtful and scarred from the War.  I was routing for him from the beginning even though he sometimes took forever to make a decision.  He was a very thorough man when it came to research and making a decision.  I guess that would make him the good lawyer that he was.
I completely enjoyed this book and would LOVE to be able to visit the very real Belmont Mansion someday.  I find it ironic that at the same time I was reading this book, my brother had to make a work trip to Nashville.  I so wish I could have tagged along and seen the sights!
This was another great book by Tamera Alexander and, lucky me, I have the next book in the serious on my shelf!
﻿
Colletta
P.S.  I hope you can stop by my ETSY SHOP!
Posted by collettakay at 10:48 AM