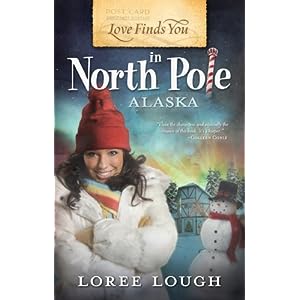 Book Description
A former Marine is no match for the spunky Sam Sinclair. Bryce Stone has returned to his hometown of North Pole, Alaska and he’s not very happy about it. “The Town Where It’s Christmas All Year Long” does not appeal to the self-admitted scrooge. What’s worse, Bryce must postpone his dream of opening a furniture shop when his Aunt Olive retires and leaves him to manage the family’s cluttered Christmas boutique.
Bryce hires a petite and inexperienced young woman to run the store, figuring that if she fails, he can sell the place! But Bryce underestimates Sam, who grew up with seven rowdy brothers and is out to prove her mettle in the frozen north.
It’s a battle of wills and the two soon find that they’re fighting for more than just the shop. After all, love takes as many forms as the snowflakes that blanket the streets of North Pole.
My Thoughts:

I chose to read this book now, the few days after Christmas, because I still wanted that Christmas feeling for just a bit longer.

The cover is more than a bit misleading.  The book is about North Pole, Alaska.  In the summer!

It is a touristy town whose theme is Christmas but it just wasn't what I thought it would be.

The cover shows Sam all bundled up in a parka, scarf and toboggan with snow and a snowman in the background.  Nowhere even close to being in the story.  I think she got to Alaska in May and it was just starting to get to be wintertime in November by the end of the book.

While Bryce, the hero, seemed real enough; Sam was a little too perfect and it was emphasized a great deal. Tiny, petite, gorgeous, pink tipped fingernails, tiny little feet in heels.  It kinda made me not like her very much!   lol


Saying all that, I wasn't displeased with the book.  It was a sweet romance.  Maybe I'm just being a little PMS-y.

Posted by collettakay at 4:19 PM