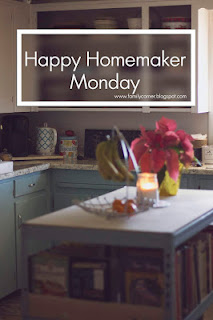 Come join Diary of a SAHM for Happy Homemaker Monday.
~~~~~~~~~~~~~~~~~~~~~~~~~~~~~~~~~~~~~~~~~~~~~~~~~
Hello, and Happy Monday!
The weather outside is:
We got some rain on Friday which we need desperately.  It then turned to snow but we only got enough to cover the ground.  I haven't looked at the weather for this week yet.
On today's to-do list:
I'm getting back onto my normal schedule of going for groceries on Monday mornings.  It isn't nearly as crowded in the store as it is on Saturday.
Happening this week:
Laken goes back to face-to-face school on Tuesday.  She's excited about seeing her friends, but she is going to be a bear to get up at 6am after sleeping in everyday for well over a month.  Conditioning for Track & Field is also starting (optional) but she hasn't decided yet if she is going to go this early in the year.  For some reason, she thinks she doesn't need it!  Ha!  Being schooled virtually, she's barely gotten out of her bed or off the couch during the day.  I'll let it up to her but I'm pushing for it!
We have dental appointments this week also.  The hubby is on second shift as is Kaylee, so their appointments are in the morning.  Mine isn't scheduled until afternoon.  I had to change Laken's appointment until next week as I wasn't about to take her out of school on her first day back.
Currently reading:
I'm still reading "Wyatt" and it is so good!  I wish I had time to sit and read it from e-cover to e-cover!  But, alas there are things such as laundry to fold and dinner to make... 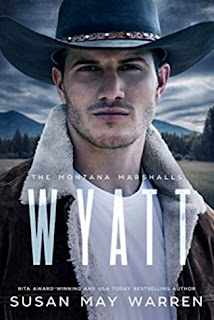 On the TV:
The Prodigal Son!!!! ~ It is back!  I'm so excited!  I was at my computer desk and the hubby asked me if I wanted to watch TV.  I was about to say "no thanks" and then he told me what we were going to watch.  I wasn't sure if it was coming back on this year.  Last season was SO good!!  Definitely my favorite TV show right now :)
Call Me Kat ~ I gave it a second chance and am still on the fence!  I don't enjoy the bits where Kat talks to the camera.  I'll give it one more episode before I make my final decision on whether to keep watching or not.
Masked Dancer ~ My husband was watching this show and I think it just might be the dumbest show I've ever watched!  I thought Masked Singer was bad but, no!  Masked Dancer has it beat.  If you like either of these shows, I don't mean to offend, but they are just not for me!
Listening to:
I featured  "Don't Tread On Me" by We The Kingdom this week on Songs on Sunday.
On the menu week:
Monday ~ Cheddar Bacon Potato Soup, Sandwiches
Tuesday ~ Ham, Fried Potatoes
Wednesday ~ Spaghetti, Garlic Bread
Thursday ~  Fish, Fries
Friday ~ Lumberjack Snacks (local food truck)
Saturday ~ Breakfast for dinner
Sunday ~ Potluck at Church
In the Craft Basket:
I've finally picked the "Linen" yarn back up to work on an afghan for the hubby's co-worker who requested an all cream afghan.  I'm having the hardest time deciding on a pattern!  Any ideas?
Picture From the Camera: 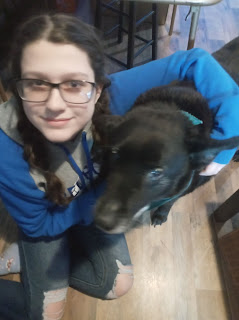 Laken and Lilah
Memory Verse
"I planted, Apollos watered; but God was causing the growth "  1 Corinthians 3:6
Have a great Monday!
Colletta
I'd love for you to stop by and give THE SHOP some love!
Posted by collettakay at 12:00 AM