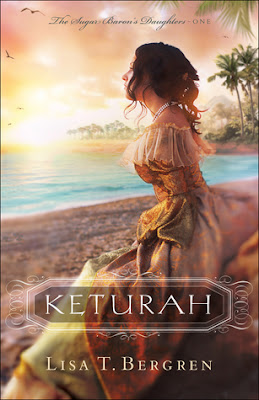 Blurb:
In 1772 England, Lady Keturah Banning Tomlinson and her sisters find themselves the heiresses of their father's estates and know they have one option: Go to the West Indies to save what is left of their heritage.

Although it flies against all the conventions for women of the time, they're determined to make their own way in the world. But once they arrive in the Caribbean, proper gender roles are the least of their concerns. On the infamous island of Nevis, the sisters discover the legacy of the legendary sugar barons has vastly declined--and that's just the start of
what their eyes are opened to in this unfamiliar world.

Keturah never intends to put herself at the mercy of a man again, but every man on the island seems to be trying to win her hand and, with it, the ownership of her plantation. She could desperately use an ally, but even an unexpected reunion with a childhood friend leaves her questioning his motives.

Set on keeping her family together and saving her father's once-great plantation, can Keturah ever surrender her stubbornness and guarded heart to God and find the healing and love awaiting her?

My Thoughts:
This was an epic story!
From a mansion in England, to a ship on the high seas, to the Caribbean island of Nevis!
I was captivated by the details of the sea voyage and by the captain of the ship (hope to see more of him in later books!)
I was not prepared for the imagery of the island of Nevis herself!  The author did an AMAZING job with the description and narrative.
Keturah (love that name) was strong and stood up for "me and mine" throughout the entire book.  There was one scene which especially showed her vulnerabilities, though.  She had much to work through from her past which at times led her to seem very harsh.
Gray (don't you just love that name for a hero) was everything you would want in a best friend.  Sometimes Keturah treated him abominably but (spoiler!) it all works out in the end :)  I really liked Gray's character, flaws and all.
I loved getting to know the Banning Sisters.  All three were equally interesting.  I'm already eyeing up "Verity"; "Selah" actually won't be published until Spring 2020.
I'm looking forward to both!
﻿
Colletta
P.S.  I hope you can stop by my ETSY SHOP!
Posted by collettakay at 12:00 AM